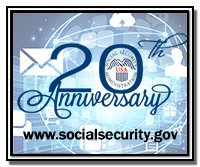 For most of us, it’s hard to imagine a world that doesn’t include the Internet. But twenty years ago, the world wide web was a strange new world for most people. Morning talk show hosts and news anchors mentioned “this Internet thing” as though they didn’t quite understand what it was. Time Magazine did a cover story about “the world’s largest computer network” as the next big thing.

Now, in 2014, it averaged more than 17 million visits a month to the more than 45,000 pages. Last year alone, the website had 83 million visits. It offers 20 online services and more than half of the nation’s new retirees complete their applications online.