Seventy-five years ago, the government cut 65-year-old Ida May Fuller a check. It was numbered 00-000-001 — the first Social Security payout. Fuller, of Ludlow, Vermont, didn’t realize it at the time, but her check helped launch the granddaddy of all entitlement programs. And it secured Fuller, who never married and had no children, a place in American history.

Today, even as its future lies in financial uncertainty, many consider Social Security one of government’s biggest successes. But in its infancy it was hardly a sure thing, and not well understood by many, including Fuller.

“It wasn’t that I expected anything, mind you, but I knew I’d been paying for something called Social Security and I wanted to ask the people in Rutland about it,” she’s quoted as saying in a Social Security Administration document.

Fuller, known around Ludlow as “Aunt Ida,” died in 1975 at age 100. By then, she had already become a celebrity of sorts, with a few previous brushes with fame…Social Security has undergone significant changes since Fuller received her first check, including the addition of disability benefits in 1956. Today, 59 million retired workers, spouses, disabled workers and survivors get monthly payments averaging $1,194.

The latest overhaul came in 1983, when Social Security was on the brink of insolvency. Congress increased payroll taxes, cut benefits and gradually extended the age when retirees can claim full benefits. The changes shored up Social Security’s finances so it could absorb the initial wave of retiring baby boomers.See her story here: http://news.yahoo.com/meet-ida-may-fuller-recipient-1st-social-security-061341644–finance.html 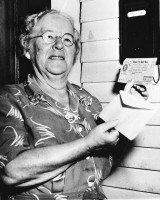